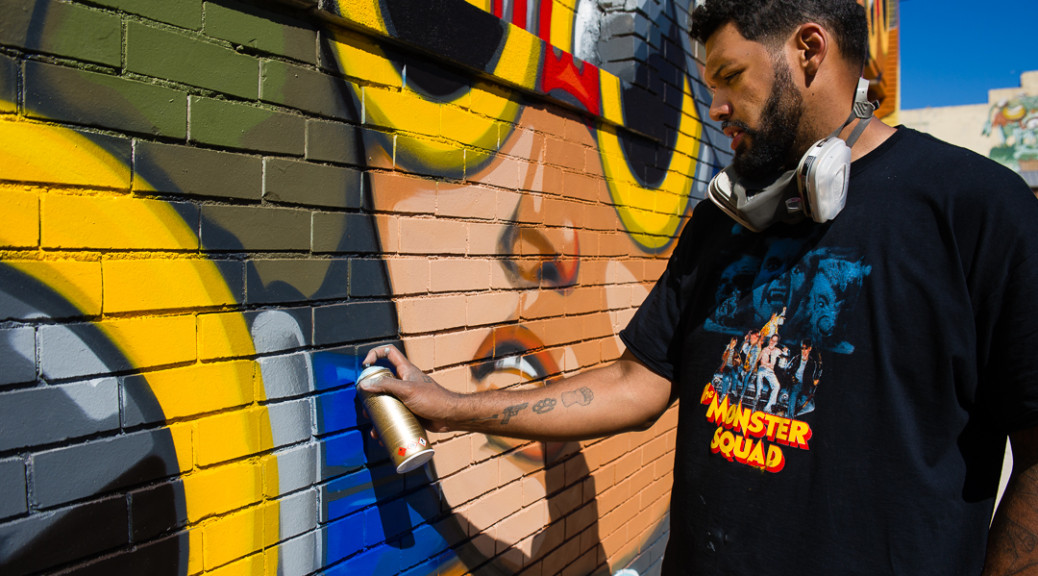 Detroit murals are known as some of the best street art in the world.  Recently,  45 world-class local and international artists were invited to come and paint large-scale murals throughout the Eastern Market district.  Murals in the Market was a fantastic event to watch unfold.  It brought many talented artists to the city and created some phenomenal murals for Detroit and all of the world to enjoy.  I love to see these kinds of events going on in our city.  They put the world’s eyes on Detroit and Show the city in such a positive and creative way.

One of the  Detroit Murals that caught my eye most, was that of Chicago native and artist Hebru Brantley.  One immediately notices that Hebru is an imposing guy when standing next to him.  I stand six foot tall and had to look up to converse with him.  He is a big guy with a big easy going way about him.  You find yourself immediately talking to Hebru as if you have known him your whole life.

Hebru told us that what compels him about this type of art is “It’s part of the culture.  It’s just street art and to be able to present your artwork on a much grander scale than gallery work or museum work.”  It should be noted that the artists creating these Detroit murals were not paid for their efforts.  To that point, Hebru says: “It’s absolutely a labor of love”

When asked how long he has been doing this, Hebru replied “Well, I’ve been painting my whole life.  Doing street art since I was about fourteen.  Sort of traditional graffiti culture which has evolved into what you see here now.”

As to what the mural Hebru so graciously gave to the city of Detroit represents, he said “Everything I do is a narrative.  So, these are characters that I have used in repetition.  I always use these particular characters when I do street works or public works.  Yeah, there is a narrative in it always.  The characters are obviously looking and pointing in one direction.  And in that way are informing the viewer or audience that they are viewing something or that something has captivated their attention.  I think that from there it is sort of left up to the interpretation of the viewer to determine what that is and what that could be.”

Hebru’s final thoughts on street art and Graffiti “I think that it has already evolved from the late seventies and early eighties to what it is now.  This more diverse form of public expression and I just think it will continue to grow.  I think that communities around the world are embracing it.  Some slower than others, but I think that with all things when artists come into the area and help with the beautification of it,  it brings the people.  It brings the community.  It revitalizes the community.”

I couldn’t agree more Hebru!  Thank you for visiting and sharing your love so unselfishly with Detroit.  And thank you for talking to Detroit in Portraits!