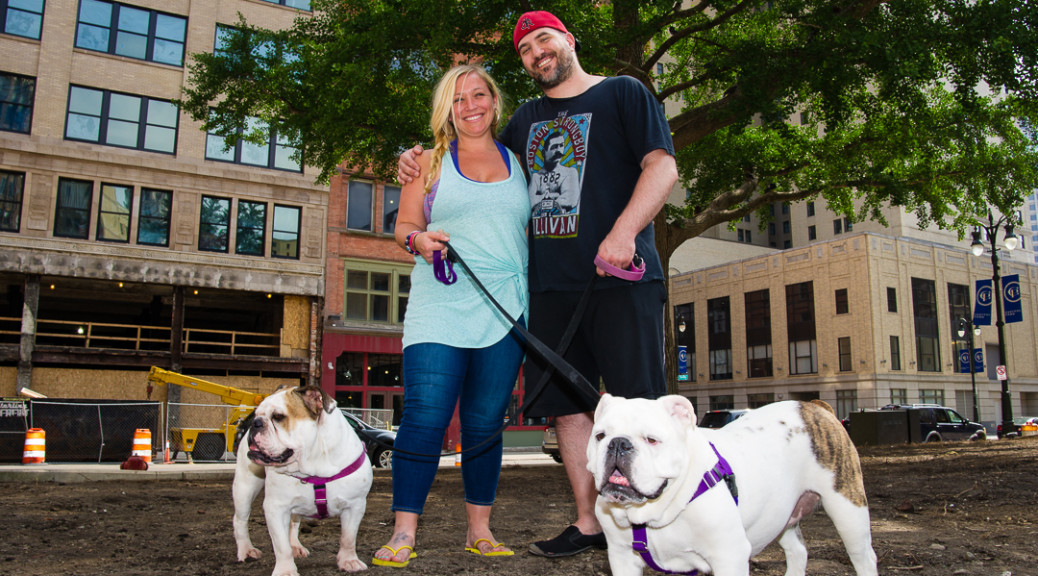 Well, you get the idea.  Detroiters are also big pet lovers.  Pets of all kinds.  From dogs to lizards, Detroit pets cover a wide range of animals and their pet loving Detroit masters.  No Room for a dog in the city you say?  Meet Lauren and Michael and their two, big, beautiful Detroit loving Bulldogs!  I happened along the couple and their Detroit pets in Capitol Park.  An awesome place in Detroit to spend time with your pet.  What is Lauren and Michaels fondest memory of Detroit?  Lauren says “Well, we just moved here a year ago.  So, this whole past year.  Just getting to know the city and being here through all the changes is pretty cool.”  Michael added ” Yeah. We lived in New York a long time.  Most of our lives actually.  She is from Massachusetts originally, but we lived in the city and moved here.  It is a nice break from New York.  New York is so fast paced and everything.  And it’s cool that everyone we talked to said this is the time to be in Detroit because it is a burgeoning and flourishing city right now with a lot of things going on.  So we are happy.  We wanted to live downtown.  We didn’t want to live in the suburbs.  We wanted to be downtown to see what it’s about. To actually be in Detroit!”

Lauren and Michael’s favorite place in Detroit?  Lauren replied ” We have a lot.  I go to the riverfront a lot.”  Michael said “We definitely like Slow’s Barbecue a lot.  We love hanging out in Campus Martius.  I’m a big movie buff, so to have a places like the Redford theater that screens old school movies on film.  Stuff like that is super exciting to be a part of.  I love that kind of stuff.”

Lauren thought for a moment when asked to tell me a secret about herself, but then proudly announced “Yeah, I can go through a whole box of Cheez-Its in one (Television) show!”  Yeah, well Lauren, I think we all do that!  Thanks for sharing though.

Lauren describes her style as “I would say laid back.  Kind of Urban Casual.  Does that even exist?”  As for describing his style, Michael said “I would probably be an aging Hipster.  I don’t take myself to serious and I like to have a good time.  I’m a big kid at heart.”

It was really fun to meet and talk with these super Detroiters and their wonderful Detroit Pets.  This is the real Detroit, lots of great folks enjoying life and opening their hearts and minds.  For those of you living in Detroit with your Detroit pets, check out 3 Dogs 1 Cat 4 Detroit in Eastern Market for all of your pet supplies. Really great Detroiters and people there.  Be sure to say hello to one of my favorite Detroit pets Elroy, when you visit.